Do not know if this prohibits cross posts to Ancestry bulletin boards. The list still sends notices, but no archive WebView.


If you would like to contribute to the history of St. Peter's Cemetery, please contact officials below.

Vicky Branton's story in the Daily Iberian July 1st, "Resting in Pieces" was a welcome read.  A few volunteers have come forward with a project to re-record the burials at St. Peter's Cemetery among a spattering of ideas to keep the history of Louisiana alive.  The project began about two years ago to update & re-verify the 10,633 recorded burials of the church.

"A cemetery might be the resting place of the dead, but the living are responsible for its perpetual care."

"The laws have tied up the restoration process and forced the people involved to research descendants. Descendants permission and funding is needed to help with the much needed historical repair of the tombs. That is of particular interest to DeCourt who said patching old mortar with modern techniques or using the wrong kind of paint can do more damage when the purpose was to repair and protect the tombs for posterity."

The current budget of $8,000 allows for simple maintenance but does not allow for historical repair, perpetual care or preservation.

You may read what other states are doing to care for historical cemeteries here. 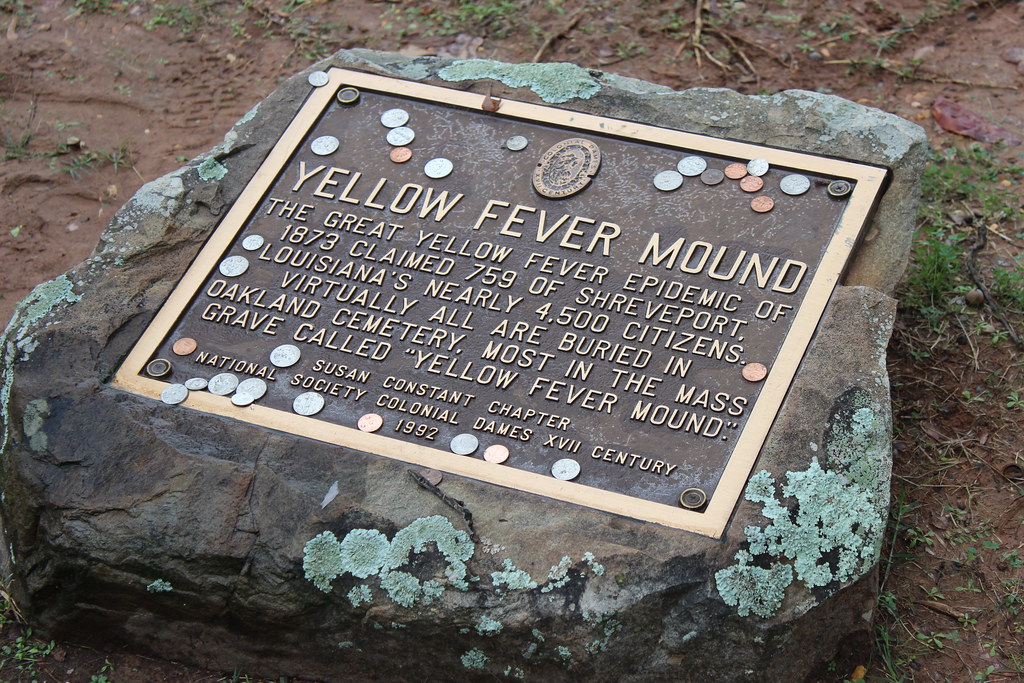 Oakland Cemetery, Downtown Shreveport A marker designates the site of the Yellow Fever Mound, where nearly 800 people are buried in a mass grave in Shreveport's historic Oakland Cemetery. For more information on the cemetery, visit www.oaklandcemeteryla.org

With much of the infrastructure now in place, we are now turning to gainfully utilize the talents of the Friends of Oakland Cemetery. The organization is up and running, and we are looking for volunteers. Specifically, we need help in the form of monument inventory and restoration; advertising and public relations; tour guides; website development; tour documentation, design and implementation; events planning and operation; family history documentation; civic event speakers, re-enactors, and more. You can do as much or little as your time will allow. Please use the form on page 2 to indicate that you would like to help us. We need your help to restore and preserve this grand old cemetery! We promise a rewarding experience!

This site was the national hospital for Hansen's disease in late 19th/early 20th century. Artifacts may be associated with slave quarters of Indian Camp Plantation that was taken over by the Leprosarium.

Sister Zoe's Funeral - the only Sister known to be interred with patients.


"This historic image depicted a funeral on the grounds of the Carville, Louisiana Leprosarium, in honor of Sister Zoe, the only member of the Sisters of Charity who'd wanted to be buried in the same cemetery amongst those for whom she'd cared while they were patients at the facility. This graveyard was located on the grounds of the hospital."

"Between 1894 and 1922, there were 125 patient deaths, all of whom were buried on the grounds of the leprosarium. The hospital was a self-contained compound with its own storehouse, laundry, food-processing facilities, patient treatment centers, recreational facilities, and cemetery."

"Patients of the U.S. Marine Hospital in Carville, Louisiana produced a set of 35 mm slides around 1950 from which this image was derived. In 2002, a patient’s son donated the set, the only one known in existence, to the museum."

Update on the Bayou Coastal Louisiana Cemetery Project
The Louisiana State Archives will showcase the work of the Bayou Coastal Cemeteries Project with an exhibit running through the end of March. To date, 137 cemeteries have been documented.
The Louisiana State Archives is located at 3851 Essen Lane in Baton Rouge. Hours are Monday through Friday, 8 a.m. to 4:30 p.m.
For more information about the project, contact Schexnayder at jsche15@lsu.edu, or 225-578-6448.

Objectives
Our objective is to survey and record specifics of endangered cemeteries within the Louisiana state-defined coastal zone. Through this survey, we hope to show loss of state's cultural heritage as coastal erosion and sea level rise continue to affect Louisiana's coastline.
Methodology
We will begin by accessing data/resources already in place to minimize research to be done. This can be accomplished through resources such as USGS data, state topographic maps, Google Earth, etc. Then we will visit cemetery sites to record GIS location, size, population density, proximity to Gulf and historical persons buried within. Cemeteries will be prioritized in terms of most endangered. Our initial survey work will begin in Grand Isle, Louisiana - a threatened coastal site. This visit will be used to determine time required to record site data, and to determine the number of sites to be visited within the funding time limit.
Rationale
The preliminary reason for the project is to note the heightened need of preservation. By protecting the physical setting, the cultural heritage is protected as well. It is also to show connection of the living to the dead. There is a loss of culture as people are forced to move inland - cemeteries are no longer cared for and left abandoned. The project will foster the idea that although physical structure may not be able to be permanently saved, the culture can be saved through documentation. Lastly, the survey work will be used to define magnitude of project and as a preliminary step toward a larger grant application.
Results
A GIS map is in creation for future access and use by local, parish and state entities. Two cemeteries recorded are not in the correct location on Google Maps. A list will be submitted to Google near the end of the project to ask for and highlight the need for correction.
Benefits
Significant Accomplishments
Twenty-two cemeteries were recorded between July 2011 and January 2012. Of those cemeteries, 2 are partially submerged due to erosion, and 3 flood daily with the incoming tide. Four cemeteries are in severe disrepair due to storm surge damage post Hurricanes Katrina and Rita. All cemeteries recorded have been inundated by a combination of one or more of the hurricanes Katrina, Rita, Gustav and Ike. A working partnership has been formed with DMORT to share data from cemeteries they have mapped, and to possibly help identify individuals located in FEMA replacement caskets as the research is carried out.
CONTACT Schexnayder, J. jsche15@lsu.edu
Manhein, M.
Maurice Wolcott