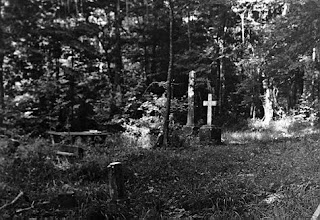 Asphodel Plantation was built in 1820-1830; it took 10 years to complete. It's cemetery is listed as one of the only private cemeteries on the National Register of Historic Places.

STATEMENT OF SIGNIFICANCE
Lyle Saxon has called Asphodel the "jewel of Louisiana" because it epitomizes an era when
great fortunes could be made in the Old Southwest by the cultivation of cotton.
Here in the Felicianas of Louisiana were men of much culture and sophistication. Many
designed their own dwellings with great ability not only from their knowledge of art but also from an understanding of the climate in which they built.

Benjamin Kendrick is an example of one of these men who built with much care a house
that has some of the finest interior woodwork to be found anywhere. The construction of Asphodel began about 1820 and lasted nearly 10 years. The fine workmanship, the attention to detail, the knowledgeable application of symmetry and elegance were never planned with some future in mind that might turn Asphodel into a museum. It was built as a gift for his wife, Caroline.

The original noun asphodel means any lilaceous plant - daffodils to the 18th century English
and French poets and narcissus to their Greek counterparts of a much earlier era. Thus as the
builder, he left for posterity a fine example of classicisms, the marriage of language and
architecture. The year that construction of Asphodel was completed, Benjamin Kendrick died leaving one daughter, Isabel, who married Col. Robert Fluker.

During the 10 years the house was under construction, John James Audubon painted the
portraits of Kendrick's daughter, Isabel Kendrick Fluker, and the first two (sons) of her twelve
children by Robert Fluker. These paintings are now in Virginia and bear the inscription "painted at their beloved Asphodel."

The Civil War changed the life style of the Flukers as it did for many other Southeners.
During the Battle of Port Hudson, a group of Union soldiers set fire to Asphodel. Miraculously, the fire went out.

After the War, Poverty was the guest who stayed longest at Asphodel as at many of the
other great houses in the South. For approximately 40 years until their deaths in 1945 and 1948, the Misses Smith were guardians of the family heritage at Asphodel. In all this time, they never left the grounds, and when they died they were buried in the family plot on the grounds.