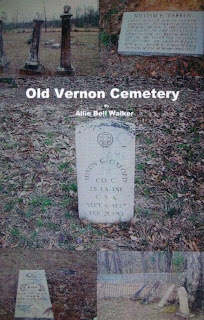 On July 23 2001, I was in visiting in Louisiana and decided to make a trip to Vernon going by the cemetery and was sadly disappointed at the site. I took several pictures of leaning tombstones, limbs a top graves, over grown grass and weeds. There was also some over turned and broken marble tomb housing over a couple of graves, that I had believed was done by vandalism but can not be certain. When I returned home I decided to post this cemetery to the this website. I was soon notified by a person that several people in the community of Vernon had set a date on July 14, 2001 for the first meeting. The purpose of this meeting was to elect a cemetery committee. There were five members elected to serve on this committee and naming this committee "The Old Vernon Cemetery Committee".

After receiving permission from land owner with members and plenty of volunteers they started by clearing brush and limbs. When this was accomplished they took on the task of cleaning all tombstones which were finished with in two weeks.
The cemetery committee have been depending on donations and other money was made from a fish plate dinner. They received enough money over time to install a chain link fence replacing the old wire fence that had been smashed by fallen trees. A cemetery sign was attached to the fence naming "Old Vernon Cemetery" and listing the cemetery committee members with telephone members. There is not a cemetery sign on the main highway pointing to the cemetery but there is a sign advertising the Vernon church. The cemetery lies directly behind the church but a new oil well road is a better way to the get to it now.

Recently another storm has damaged some tombstones and the committee now knows that it is a continuing job to the up keep to the cemetery. The cemetery committee are researching for what may be needed in making this a historical cemetery.


There are several noted and historical persons buried in the cemetery including a civil war soldier, a former Louisiana senator who signed the succession from the union for the state in 1861. There was also the third sheriff of Jackson Parish, a Methodist circuit riding preacher and much more.


Mrs Allie Bell Walker has written a 24 page book/pamphlet listing all graves that has tombstones with information. She has also written some history of several of the persons buried there and some interesting history of Vernon.


"In this video Captain Robert Lansden visits this cemetery in July of 2007 (two years since the hurricane) and witnesses firsthand the negligence that these silent victims have suffered. Veterans of WWII, Korea and Vietnam rest in this cemetery. Now there resting place is in need of restoration. Graves and tombs that were cracked and thrown about by the wall of water that surged during Hurricane Katrina need to be repaired. Years later many graves still lie scattered, misplaced and broken. Many of their remains lie unmatched or unidentified. This video will list many of them that have been identified. You can help. Contact Captain Robert Lansden at (985) 370-9006 to assist in honoring those who served. Thank you." 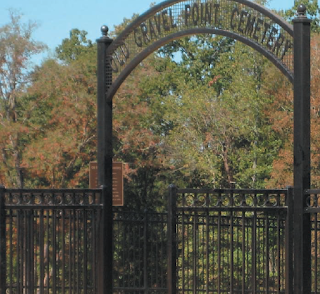 This photograph was found in the archive from the old Louisiana Cemetery Preservation NING and was used as someone's profile picture and labled Faust Cemetery.

If you are the author of this photograph please email!

Faust Cemetery in Ouachita Parish was reported to Saving Graves in July 2000 as being endangered, abandoned, with serious encroachment issues i.e. a home was being built on top of the cemetery.

By Preservation Resource Center, Advocacy Department No real name given

Photo taken by flickr user cicily7 (Cecily Johnson) on June 11, 2007 in Chakaby, Louisiana, Lafourche Parish or St. James Parish Hwy 20. Cemetery behind abandoned church in Chackbay, Louisiana. I wonder what the name of this cemetery is or used to be? (St. Lukes)

More photos from this cemetery behind the abandoned chapel here.

This photo taken by flickr user, Must Love Real* on December 10, 2007 who states this abandoned chapel is in Louisiana. Where I wonder and in what parish?

See more photos of headstones in the cemetery behind the chapel here.